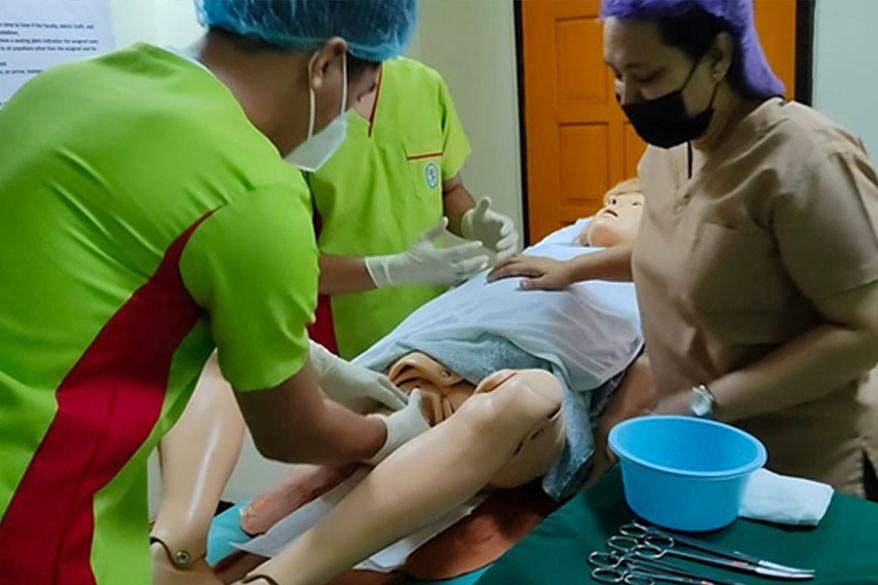 It started with a vision. A vision where the youth has the benefit of education has the society has the benefit of its youth. This has been the compass which led the philanthropic couple of Mr. Lemuel and Engr. Emilia Podador to establish Tagum Doctors College, Inc., in 2007

Lemuel and Emilia Podador envision of being in service to the community. They considered possibilities — a hospital, a university, an affordable housing project for the community, among others. As it has always been said a journey of a thousand miles starts with a single step.

Twenty-five years ago, Mr. Podador took a leap of faith, investing on his first subdivision project in Tagum City, the RJP Village I; the second subdivision was named after the wife, the EMILIA HOMES, in Davao City. From then on, 10 years after the couple, developed four (4) more housing subdivisions and engaged in land banking, the rest was history.

For the first five (5) years, the management concentrated in rebuilding the dilapidated single storey building to expanding it to a 5-storey modern hospital. It was also a process of learning the ropes of how to manage a hospital. At present, Tagum Doctors Hospital is a state-of-the-art 7-storey medical facility with a battery of competent medical professionals supported by the most modern equipment and facilities. It earns the distinction of being the top hospital in Tagum City.

The success of Tagum Doctors Hospital has brought more opportunities. It then opened the doors to fulfilling the Podador couple’s third vision — an educational center for all. Hence, in 2007, the Tagum Doctors College, Inc., (TDCI) was registered at the Securities and Exchange Commission. It started with a three (3) storey edifice with a sky-gymnasium at the back of Tagum Doctors Hospital, when it opened its first academic year in June 2008. It had approximately 200 enrollees on its first year.

At the onset, the college under the direction of the Commission on Higher Education was granted permits to open the baccalaureate degree programs in Nursing, Pharmacy and Hotel and Restaurant Management, under the leadership of Emilia P.N. Alegre, RN as the College President.

Since its inception, TDCI has set its eyes on academic excellence, a legacy espoused by its founder, the late Engr. Emilia Lim-Podador, who up to the present served as the inspiration and moral compass.

Tagum Doctors College, Inc., always aimed to be on top of its game. To support its academic programs, it established simulated hospital set-up for its Nursing Department, pharmaceutical laboratories housing the High Performance Liquid Chromatography (HPLC). TDCI is the only institution in the province that possesses such instrument, apart from the Food and Drug Administration.

The College’s fruits of success were first repeated in 2012 when the first graduates of the nursing program took the Nursing Licensure Examinations and garnered 87%. This has brought the college the distinction to be the 2nd ranking nursing school in Davao del Norte holding this distinction until at present. In 2014, the Pharmacy Department, a pioneering discipline in the Province of Davao del Norte, likewise produced a 73% rating in the Pharmacy Licensure Examinations which increased to 82% the following year. This, again, earned the college the prestige of being the top performing Pharmacy School in Mindanao, relative to number of test-takers.

In 2014, Tagum Doctors College, Inc., known for its aggressive educational and business prowess offered pioneering baccalaureate degree programs in Radiologic Technology, and Medical Laboratory Sciences in the Province of Davao del Norte. In the same year, in response to the government’s call for upgrading educational services through K-12 program and ASEAN Educational Integration, TDCI started to offer Senior High School Program under the tracks of Science, Technology, Engineering and Mathematics and Technical Vocational and Livelihood, General Academic Strand, Humanities and Social Sciences. Along with it, is the opening of programs in Health Care Services NCII, Pharmacy Services NCII, Massage Therapy NC II and Bookkeeping NCIII under the Technical Education and Skills Development Authority.

Indeed, what was once a vision is now becoming a reality. It continues to soar high as it waves its banner of success.